Louis Van Gaal’s two years in charge of Manchester United may not be too fondly remembered, but it was a great time for members of the club’s academy.

United finished fourth and fifth in Van Gaal’s two seasons at Old Trafford, also winning the FA Cup in his final game in charge in 2016.

We’ve looked at the 15 academy players he handed debuts to, to see how their respective careers have developed since.

Van Gaal’s two years in charge of Manchester United, and the subsequent ups and downs, can be neatly illustrated by Lingard.

After the attacker had spent time on loan at Leicester, Birmingham and Brighton, Van Gaal entrusted him with a start in his first competitive match in charge of United.

But Lingard had to be replaced due to injury after just 24 minutes of a defeat against Swansea and by the time he returned to fitness, he was sent out on loan yet again, this time to Derby.

The following season marked Lingard’s breakthrough at Old Trafford, and he ended the campaign scoring the winning goal in the FA Cup final against Crystal Palace, which turned out to be Van Gaal’s last in charge of the club.

After making himself a favourite under Jose Mourinho, Lingard fell out of favour under Ole Gunnar Solskjaer before rediscovering his best form on loan at West Ham under David Moyes.

The one-time England international returned to Old Trafford but still found himself on the fringes of the side and left for Nottingham Forest in the summer.

Rashford was thrown in for a Europa League tie with Midtjylland after Anthony Martial suffered an injury in the warm-up and stole the headlines with two goals.

Three days later, the teenager scored twice against Arsenal and also bagged the winner in the Manchester derby later that season. He’s gone on to score plenty more for both club and country while also becoming the nation’s darling.

But his form and performances fell off a cliff last season, causing Rashford to lose his spot in the England squad. He’s played better this season but faces an uphill struggle to convince Gareth Southgate to take him to Qatar next month.

Marcus Rashford introduced himself to the world 🙌

A dream debut, and a sign of what was to come 🔥 pic.twitter.com/YkrndnGe1v

The first player signed by David Moyes, Varela had to bide his time to break into the United side, making 11 appearances in Van Gaal’s final season in charge.

A loan to Eintracht Frankfurt the following campaign did not quite work out as planned as the right-back went for a tattoo days before the German Cup final, only to ultimately miss the match after it became infected.

Varela returned to his native Uruguay with Penarol before moving back to Europe with FC Copenhagen in December 2018. The defender made 53 appearances for the Danish side but is now plying his trade for Flamengo in Brazil.

“It would be a dream to go back to Old Trafford,” Varela told The Sun in December 2019. “It would be a beautiful moment — I wait for this.

“I’m still only 26. I of course want to go back to the Premier League at some point. In the future, maybe I can come back and play for Manchester United – I hope.”

Varela: “Van Gaal gave me the chance to play so I have to say thank you. He is a crazy coach. He was always angry with the players but it was good. I enjoyed it.” #mufc [Sun] pic.twitter.com/RMU0cJY0xi

An injury crisis in defence presented McNair with an opportunity in the Red Devils’ starting XI, but he endured a love/hate relationship with Van Gaal.

At one stage Van Gaal suggested McNair could be United’s right-back for the “next 10 years”, but he later criticised the Northern Irishman as “he thought he was a striker” when he gave the ball away high up the pitch in a draw with Leicester.

McNair has since insisted he was played out of position, and his form in midfield for Sunderland in their Championship relegation season led to a move to Middlesbrough in 2018.

The Northern Ireland international was named Middlesbrough Player of the Year for the 2020-21 season and helped knock United out of the FA Cup in 2022.

Janko’s solitary appearance under Van Gaal was an unhappy one as he was subbed off at half-time in a 4-0 loss at MK Dons in the League Cup.

The right-back joined Porto in 2018 but did not play for the Portuguese club, instead spending time on loan at Nottingham Forest and Young Boys. In the summer of 2020, he moved to Real Valladolid but couldn’t prevent their relegation from La Liga.

He now turns out for Bundesliga side Bochum.

Like Janko, Thorpe made just one appearance for United, coming on as a 94th-minute substitute in a win against West Ham.

The defender then dropped into the Football League with spells at Birmingham, Rotherham, Bradford and Bolton.

Now 29, he has been without a club since leaving Indian Super League side ATK in 2018 and appears to have left football behind for good. 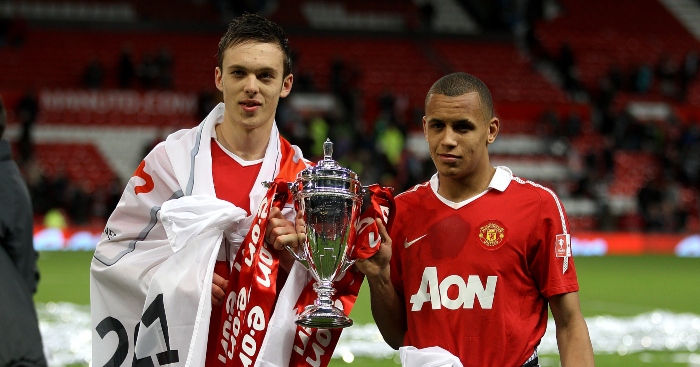 No, not that one.

The younger brother of Leicester City midfielder Matty, James is another youngster whose only United experience came in the thrashing at MK Dons.

After loan moves to Carlisle, Rotherham and Huddersfield, the defender eventually found a home at Wigan, but he was released after three years at the club.

He then had brief stints at Sunderland, Doncaster Rovers and Blackpool before signing for League One side Sheffield Wednesday on a season-long loan deal over the summer.

Blackett was one of Van Gaal’s favoured options during the injury crisis, making 12 appearances in 2014-15 and being tipped to become a “great defender” after signing a new deal in 2015.

But a loan spell at Celtic proved unproductive the following season and Blackett was then sold to Reading, where he made over 100 appearances before leaving the club in 2020.

He spent the 2020-21 season at Nottingham Forest before moving to America, joining MLS side FC Cincinnati.

After Van Gaal’s departure, Pereira had loan spells at Grenada and Valencia in La Liga before returning to Old Trafford in 2018

The attacking midfielder initially impressed under Solskjaer but lost his place in the team to Bruno Fernandes and became a much-maligned figure at Old Trafford.

He spent a successful time on loan at Flamengo before joining Fulham in the summer, impressing the Craven Cottage faithful with his performances this season.

Love’s record as a United player does not make for happy reading: two appearances, two defeats, one booking, one admittedly very good name.

David Moyes took the defender to Sunderland, but he struggled to establish himself at the Stadium of Light as the Black Cats suffered back-to-back relegations.

He then spent two seasons at League One side Shrewsbury Town, and last season at Salford City, before moving to fellow League One club Morecambe.

Poole made his only appearance for United as a late substitute in the big victory over Midtjylland which marked Marcus Rashford’s breakthrough.

The defender has revealed the likes of Paul Pogba, Jesse Lingard and Rashford took him under their wing at the club, telling the BBC: “They know it takes time. I get a bit ahead of myself sometimes and they tell me ‘take your time’ and ‘slow down.””

After being released by the club in 2019, Poole signed for Milton Keynes Dons on a free transfer, where he stayed for 18 months before joining League One side Lincoln City in January 2021.

Regan Poole on #mufc releasing him: “It wasn’t a surprise. I had an idea what was going to happen but I’ve loved every minute there – they improved me as a player.” #mulive [bbc]

After making 14 first-team appearances in 2015-16, Borthwick-Jackson was rewarded with a new long-term contract, but the left-back’s career has stalled since then.

Loan spells at Wolves and Leeds United were both terminated early amid questions about his attitude, and the 25-year-old joined Oldham Athletic on loan in January 2020.

After his United contract expired at the end of the 2019-20 season, he returned to Oldham on a permanent deal but joined Burton Albion a year later.

A 95th-minute substitute appearance against Arsenal was all Weir mustered in a United shirt, and a subsequent move to Hull City was derailed by terrible misfortune with injuries.

The midfielder joined Bolton in 2019 but his contract was terminated in January 2020, and he then signed for Pohronie in Slovakia.

He scored eight goals in 39 appearances during his time in Slovakia and then joined Hungarian top-flight side MTK Budapest in May 2021. 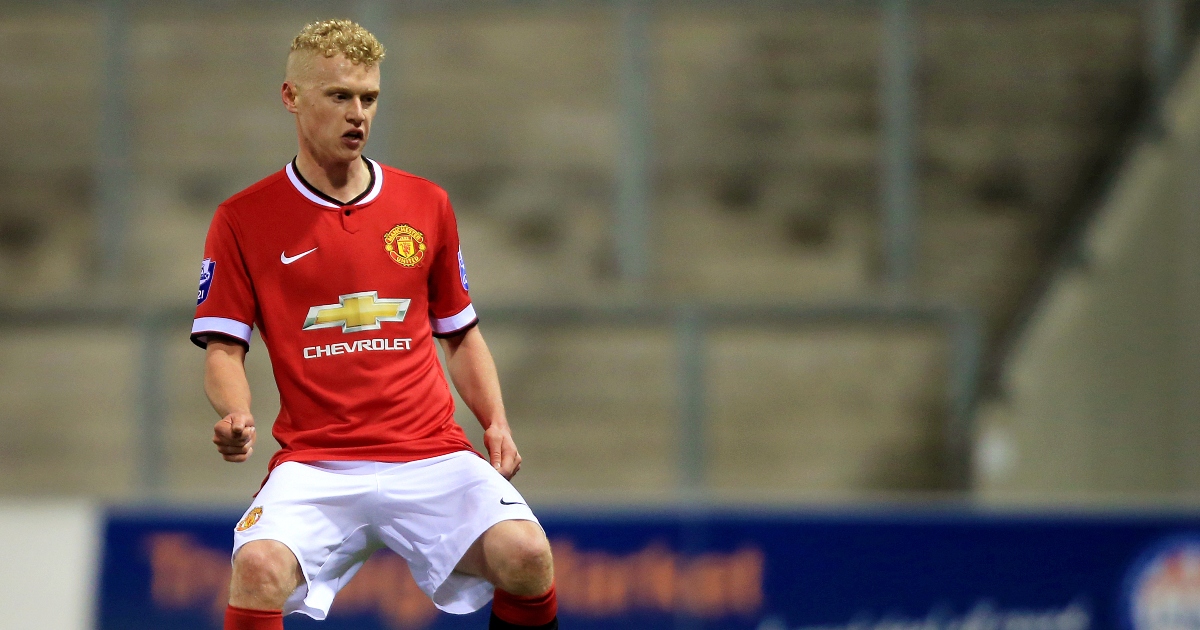 READ: The story of James Weir and his 60 second Manchester United career

The further we go through this, the more the extent of injuries Van Gaal had to cope with becomes apparent. Riley started the 5-1 win over Midtjylland, with his only other appearance for United coming as a substitute against Shrewsbury just a few days before.

An injury ended a loan spell at Sheffield United and the defender spent two years at Bradford City and Carlisle United repsectively before joining Walsall in the summer.

Fosu-Mensah was hailed as the next big thing after making his first-team breakthrough under Van Gaal in 2015-16.

“Who doesn’t want to play for United? So, yeah, I’m definitely eager to come back and to do well and to help the team and to give my all, my heart for this great club,” Fosu-Mensah told the Independent in April 2020.

Unfortunately for him, that proved impossible and he moved to Bayer Leverkusen in January 2021. The Netherlands international suffered another knee ligament injury a month later and spent 11 months on the sidelines.

But he’s back in contention now and has made three appearances for the Bundesliga side this season.

READ MORE: Man Utd’s 10 most expensive sales & how they fared after leaving